The Tosowoong Seven Day Eyebrow Tattoo pen boasts a strong claim: you can fill in your eyebrows and then just leave it for 3-7 days without having to worry about your brows. Waterproof and sweat proof, this sounds like the perfect solution or a girl who has filled her eyebrows in every day since ninth grade. It’s less expensive and invasive than micro-blading, and less time consuming than filling them in every single day. For $12 I was willing to test this out. 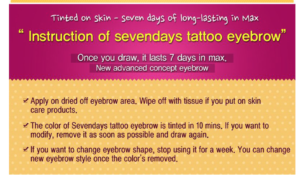 I made sure my face was clean before putting this on at night. The applicator itself is brush-like and reminds me of those paint pens you have to shake in order to wet the tip of it. I refrained from licking it (like you would with a marker or pen), but I definitely wanted to. I like my brows dark and though I got the “dark brown” pen it wasn’t as dark as I would normally use. After 5 minutes of staring, poking, and brushing I came up with a shape that I liked that seemed dark enough to last me a few days.

When I woke up the next morning I was a little nervous to look in the mirror, but when I did I was happily surprised. I felt like my left eyebrow was a little lighter than I’d like it – but after looking at the photos from the previous night I think my application was the reason for that.

Verdict: My makeup routine was 2-4 minutes shorter than usual, it felt almost too short. I got out of the house a full five minutes earlier. My eyebrows also looked more natural than when I use an eyebrow creme.

After a full day of work and my nightly routine (which included washing my face with soap), I woke up to eyebrows that were significantly lighter but still more visible than my normal brows. I’m guilty of liking my eyebrows incredibly dark, so I had to resist the urge to darken my brows with my regular makeup.

60 hours after the initial application, it seems like the eyebrow tint is all but gone. Even if there are remnants of the tint, it’s light enough that I would feel compelled to fill them in more.

The product advertised lasting “up to” 7 days so I would say that it’s claims are true – though for me I found that it lasted on the shorter end of the 3-7 day spectrum. How long it lasts is also likely to be affected by frequency of cleansing and the environment. I’m definitely going to be testing this further to see if I can do anything to make it last longer.

When I first tried it straight out of the box I had some issues with the ink saturation on the brush – after storing it for three days upright (where the ink could presumably settle closer to the brush) I found that the ink flowed much more freely.

Will I keep using it?

Yes! I was definitely disappointed to not get the full 7-day wear out of it, but only having to fill in my eyebrows every 2-3 days still saves me some time in the mornings. I like the color and I like that because it’s a tint, not a gel, it looks more natural.

If you want to try it out for yourself you can purchase it here: Tosowoong Seven Day Eyebrow Tattoo

If you have any questions about this product or suggestions for similar products I should try, feel free to leave a comment below!